Gono Kendra: A life-changing initiative for hundreds of marginalised people in rural Bangladesh

Bandhab wrapped up the Gono Kendra project, which revolved around helping rural communities form self-help groups for marginalised people, especially women, in some of the most impoverished and vulnerable regions in Bangladesh. Ambia is one member of these groups.
“I went to Gono Bidyalaya [a centre for informal education] and became a bit more educated. Then we started this Gono Kendra with 30 women”. 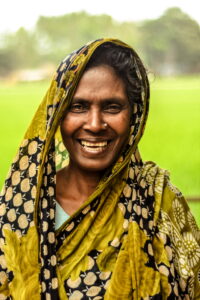 The project worked with so-called Community-Based Organisations (CBOs), regional umbrella organisations that helped people in local communities organise into groups with saving programmes, giving them a forum to discuss the issues they face in their communities and find solutions to them. As the project progressed, we found that the groups were extremely popular among women in particular.
“In the beginning, we didn’t even have any money to save for our saving programme. We were so poor that we couldn’t even save 5 taka (DKK 0.50) per week”, continued Ambia. In this Bangladesh communities, women are very dependent on their husbands. Ambia underlined that she could not buy anything before without asking money to her partner.

Thus, the underlying assumption in the Gono Kendra project was that people in these communities are perfectly able to solve the majority of their own problems, but that in the case of women, in particular, empowerment also does not happen in isolation. Once we helped them form into groups, however, these women found their voice and began to enact change in their local communities.

Some of the changes these groups have achieved have been the starting of women’s independence. Local women began to organise in opposition towards the norm of child marriage – a tradition which has prevailed in the area for thousands of years. Besides this, they were able to save up money. “We saved up the rice as a group and sold it at the local market for the next two years. We became self-sufficient, and we have saved 183,200 taka (DKK 16,654) – and now we have dreams”, said Ambia, smiling.

Asma Begumj signed up for a 6-month course at Khan Jahania Gonobidyalaya, and then she started sewing for people. Through their joint savings in her Gono Kendra, she received a loan of Tk10,000 so she could buy fabric and expand her sewing room.
Asma lives in the village of Patarpara near Bagerhat. Her husband is disabled, and they have a daughter in 8th and a son in 6th grade. Asma and her children work hard to all family well.

In the past, their financial situation was very difficult. Now she has her small business and with two employees and 3 sewing machines. Through Gono Kendra, she is also involved in social work. fighting child marriages, the dowry system, domestic violence and acid attacks. Her position is that girls should strive to become independent and able to manage themselves and thereby be able to fight poverty. She is in Gono Kendra project for some years and plans to continue to be able to help her community.